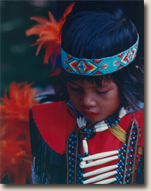 The goals of NIJC are to design and deliver legal education, research, and technical assistance programs which seek to improve the quality of life for Native communities and the administration of justice in Indian country.

In Loving Memory of Joseph Myers

The founder of the National Indian Justice Center and the founder and chairman of the California Indian Museum and Cultural Center has walked on to the spirit world. We are devastated by this loss. He was a fearless leader and educator. He was dedicated to the improvement of justice in Indian Country, public awareness of California Indian history and cultural revitalization. We will continue to carry on his visionary work for future generations. Please take a moment to learn about his life’s work and honor his legacy. May he forever Rest in Peace and Power.

Joseph A. Myers, a Pomo Indian of northern California, served as the Executive Directorof the National Indian Justice Center (NIJC), a non-profit corporation in Santa Rosa, California. He founded the NIJC in 1983, as an independent resource for tribal governments and their courts. NIJC creates and conducts legal education, research, and technical assistance programs aimed at improving the administration of justice in Indian Country.

Mr. Myers began his career as a law enforcement officer in Oakland. He was the first known California Indian to join the California Highway Patrol Officer. He was a graduate of the University of California, Berkeley (UCB), School of Law at Boalt Hall. From 1976 to 1983, Mr. Myers served as associate director of the American Indian Lawyer Training Program, creating and managing its tribal court advocate training project. During this time, he collaborated with the California Indian Legal Services to bring a lawsuit against the Bureau of Indian Affairs on behalf of his mother Tillie Hardwick. This case reversed the termination of 17 California Indian Rancheria communities. Mr. Myers contributed significantly to the improvement of education, justice and the quality of life in Indian country. For the past 29 years he lectured in Native American Studies at UCB. In 1993, Mr. Myers received national recognition from Attorney General Janet Reno for his work on behalf of victims of crime in Indian country. On December 6, 2002, the California Wellness Foundation awarded him the California Peace Prize for his work in violence prevention on Indian reservations. In 2010, Mr. Myers received the Peter E. Haas Public Service Award from U.C. Berkeley. Additionally, Mr. Myers was a founding board member of the California Indian Museum and Cultural Center. From 2002 to 2018, he served as Chairperson of CALTRANS Native American Advisory Committee. UCB recently honored Mr. Myers by naming a research center in his honor. The Joseph A. Myers Center is housed at UC Berkeley’s Institute for the Study of Societal Issues (ISSI), the center’s name is intended to recognize his extensive service to Indian country.

On December 29, 2020, Joseph Myers passed away from complications related to heart failure. He has left us with an amazing legacy of his achievements.

The Tribal Indian Child Welfare Advocates Training Program is funded by the California Department of Social Services, Office of Tribal Affairs and administered by the National Indian Justice Center. The goal of this project is to educate social workers and other professionals working on Indian Child Welfare Act (ICWA) cases. Project curricula include Tribal Criminal Background Checks, Tribal Customary Adoption, Active Efforts, and Stages of Dependency. These workshops will teach participants about California ICWA regulations and requirements. NIJC staff and consultants will deliver these curricula in one-day workshops for two to three days at each training site.

NIJC is currently looking for consultants to teach the workshops listed above. NIJC will be selecting consultants on a rolling basis as the project trainings are scheduled and new curricula are created. If you are interested in being a consultant, please review the request for bids and send your resume to Raquelle Myers, Executive Director, at RaquelleMyers@nijc.org or call (707) 579-5507.

Please follow the link to fill out our training needs assessment survey. This survey will help NIJC develop new curricula, adjust existing curricula, and provide training to regions that need it.

If you have any questions about the project, please email Raquelle Myers, Executive Direcotor, at RaquelleMyers@nijc.org or call at (707) 579-5507.